Compigne also had an interest in the thoroughbred horse industry. In 1852, the thoroughbred, Plenipotentiary, was advertised as standing at Nindooinbah.10 Thoroughbred horses played an important part in the development of Nindooinbah in subsequent periods, and influenced the later construction of outbuildings. The surveyor and timber miller, William Pettigrew, noted in 1850 that several hundred acres had been fenced for horse paddocks, which he regarded as ‘not a bad sign’, presumably because fencing indicated that the run was being used productively. On 1 June 1853, Compigne married Jessie Lambert Collins a daughter of Captain Tom Collins of Telemon who lived at Nindooinbah with the Compignes in his old age. Captain Collins is said to have been buried at Nindooinbah ‘on the hillside overlooking the lagoon’. Mrs Emma Henderson at Jimboomba was Jessie’s sister. These marriages were the first of many interconnections linking Nindooinbah to other stations and families in the district.

Compigne applied to freehold 640 acres of Nindooinbah in August 1855.11 An 1857 survey of the area to be freeholded noted the position of the first Nindooinbah house, a woolshed, a garden and cultivated area. This does not necessarily mark the beginning of commercial agriculture at Nindooinbah, as a condition of the lease was that produce of any cultivated land was to be for the station’s own use, and not for sale or barter. A surviving indentation across the hillside between the present Nindooinbah garden fence and the lagoon may mark the position of either the original dray road, or a regular ‘short cut’ through the Nindooinbah paddocks noted by a later owner in 1912.

Good seasons in the early 1850s seem to have spurred Compigne’s expansion to take over the runs of Sarabah and Kerry, a much larger run at 26,000 acres, and the further development of Nindooinbah. By 1852, 9000 sheep were grazing at Nindooinbah and Kerry, and Compigne had lent money to William Duckett White at Beau Desert station.12 Compigne built a new, larger house in 1858; after he had been advised that his application to freehold 640 acres had been granted. In June 1857, Compigne raised a mortgage to John and George Harris for £2500 using as security 10,000 sheep, 100 horses and 500 cattle on his consolidated runs, Nindooinbah, Kerry and Sarabah.

Compigne built his L-shaped house higher on the hill overlooking the lagoon. This site commands wider views than the site of the Lawless house and may have been chosen because Compigne demonstrated considerable wariness of local Aboriginal people in correspondence with the government. The house was constructed of milled timber, both pine and cedar, probably felled on the property. The Albert-Logan region was already renowned for its superior timbers. At the time of his visit in 1850, William Pettigrew was planning his sawmilling business, and it is likely that he was scouting for good timber on his visits around the region with the Commissioner for Crown Lands, Stephen Simpson.

The 1858 Nindooinbah house appears more refined than the cores of other homesteads, such as Mundoolun, constructed in the area in this period. It was a well proportioned aesthetically appealing house.

No architect or builder has yet been identified for the 1858 house. James Cowlishaw, Charles Balding and William Claydon Wakeling practised as architects in southern Queensland at this time. Of these three, Wakeling is possibly the most likely as architect for Nindooinbah, although no evidence of this has been located. Wakeling also worked as a builder with Thomas Casey in Ipswich, the pastoralists’ commercial centre. Nindooinbah was a spacious house. There was a large drawing room adjoined on its northern side by a generous room which is likely to always have been used as the main bedroom. Smaller rooms adjoined the main bedroom on its western side. A narrow room adjacent to the drawing room on its southern side was used as a dining room, although its position and earlier decorative schemes suggest that it was intended to be used as an entrance hall. The size and position of this room at the southern end of the original house may indicate that Compigne had planned a larger house. The door from the western verandah into this room, known in more recent decades as the telephone room, appears to be the original front door; it was presumably relocated from the eastern verandah with the heavy brass knocker still in place. This suggests that the room may have been designed as the entry hall to a larger house. Apart from the two rooms adjoining the main bedroom which sit side by side, the remaining rooms opened through French doors to verandahs on either side which provided cross ventilation. The verandahs were finished with Chinoiserie railings, reflecting the Victorian era fashion for oriental detail. A photograph taken in 1872 shows the verandah detailing, the shingled roof and also indicates that the verandah may have been painted in a pale colour. Unusually for this era, the house was elevated on stumps or blocks, perhaps reflecting the prevailing method of raising woolsheds on stumps so that sheep could shelter from the sun and rain underneath. The extant woolshed at Nindooinbah, believed to date from the same era as the house, is built on the side of a hill with stumps on its downhill elevations. The original kitchen at Nindooinbah was also a well finished building which abutted the western elevation of the house. 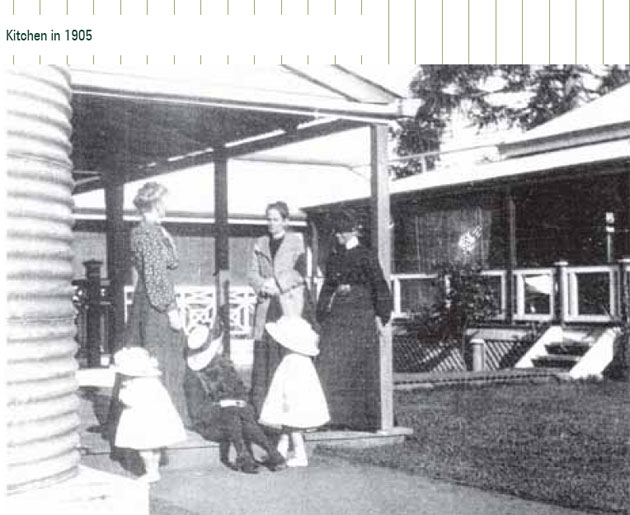 Compigne’s finances appear to have deteriorated in the late 1850s, which is likely to explain the truncation of an original plan to build a larger house. As early as 1848, Compigne was mortgaged to the Bank of Australasia and to the entrepreneur, Robert Towns, for his interests in Nindooinbah, Kerry and Sarabah.

He appears to have been overextended, having tendered for the additional runs of Merry (Murry) Jerry and Dungogie, closer to the coast. By 1851, Compigne’s mortgagors included T S Mort and the Brisbane merchants John & George Harris.

Shortly afterwards, he assigned his interests in Merry Jerry and Dungogie to William Duckett White. In June 1867 William Duckett White at Beau Desert station was reporting ‘awful losses’ for sheep farmers. Although seasons were generally good in the 1850s, all pastoralists suffered from labour shortages.

Workers left the pastoral districts for the goldfields in New South Wales and Victoria; the Logan squatters even advertised a reward for the discovery of gold in their district, doubtless hoping that if gold was found, labour would flock to the area, instead of leaving it.Chinese labourers, imported to make up the shortage, were employed in various parts of the Logan-Albert regions, including Compigne’s Kerry run, where Chinese graves are believed still to exist, but the experiment was generally not successful.

By 1859, Compigne’s mortgages to John and George Harris, amounted to almost £6000 and, by 1861, he had transferred the leases to Nindooinbah, Kerry, Sarabah to the Bank of Australasia., In February 1861, he advertised for sale his bullock team, 3000 Saxon wethers and 2000 ewes.

The leases of the three runs were transferred to Robert Towns in 1862. At this time, another threat to the squatters was looming closer; runs in the area were being surveyed to be cut up for closer settlement and, in January 1863, it seemed that Nindooinbah would be next.

In 1866, W D White wrote to his partner, George Robinson: ‘you will be sorry to hear that our old friend Compigne is smashed. Captain Towns has had a mortgage over his property for some years and he has not paid interest for some time. He owed him £9500 and Mr Towns put him out lately’. Towns applied to consolidate the Nindooinbah run (divided into Nindooinbah north and south in 1867), Kerry and Sarabah runs under the 1868 Crown Lands Act. Half of the consolidated area, 32,280 acres, was resumed; the remaining half was leased to Towns for 10 years.